Home News Grilled Pizza, or How I Stopped Worrying and Learned to Love Continual Improvement

Grilled Pizza, or How I Stopped Worrying and Learned to Love Continual Improvement August 6, 2020 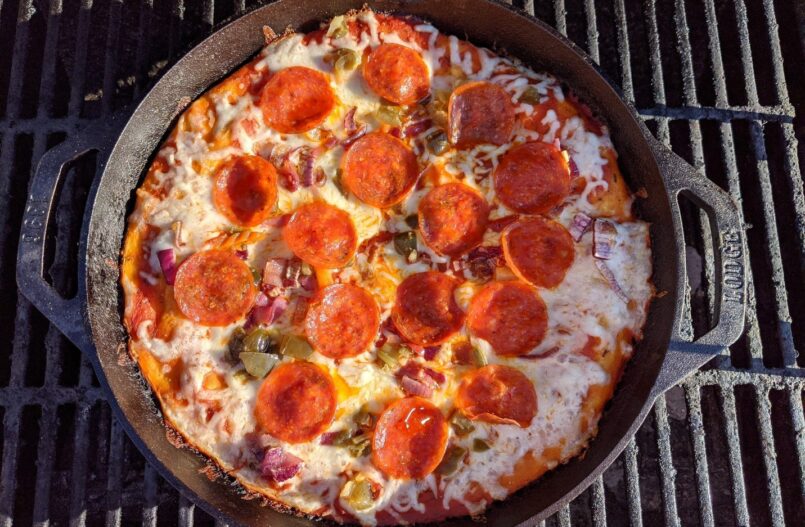 Like many others, I’ve recently taken up a few “COVID hobbies” to keep me occupied (and sane). After homebrewing a few gallons root beer, I decided I needed a hobby that didn’t result in such large quantities of food that had to be consumed in a relatively short amount of time.  After some thought, I landed on making pizza on the grill as my next hobby attempt.  Though I’ve always liked cooking and grilling, I’d never made pizza from scratch before, let alone doing so on the grill. It seemed like it would be finicky and have plenty of opportunities to mess up. But I’ve heard that there’s no such thing as a bad pizza, so I ordered two cast iron skillets from Amazon and set about my new hobby.

Normally, when I engage in something new, I research the entirety of Google for hints, tips and what to avoid.  After spending a couple of nights researching (when I could have been grilling), I decided I wasn’t going to get it perfect the first time, so I stopped the development research and aimed to deliver a MVP (Minimal Viable Pizza) while identifying improvements for next time.

I prepared the toppings my family wanted, made and kneaded the dough, oiled the pans and put the hot coals in the grill.  I was ready to grill pizzas for the first time.

So the end result proved the saying that “there’s no such thing as a bad pizza”; they were pretty good, but throughout the meal my family and I identified some improvement items such as too few onions, overdone crust, too little wood-fire taste (We could only taste the meat, not the heat.).  After dinner, I documented the items along with ideas on how to accomplish the improvements.

A week later, I made two pizzas on the grill implementing the improvements we’d agreed.  Most of the items had positive results and the pizzas were significantly better than the first batch.  We identified three new items to work on for the next batch and will continually raise the bar.

My family is certainly happy to help me work through the process, although they have asked me to stop referring to them as “stakeholders” and “consumers.” I have no doubt we will keep this momentum going and continually identify and make improvements. After all, we need something to eat while drinking all this homebrewed root beer.

What does this have to do with IT you ask?  Well, sometimes you have to stop researching and planning, and start doing.  There is no better teacher than experience and the best way to get experience is to get started with the mindset of continually improving as you go along.  Too much time on research can turn into analysis paralysis, leading to projects on perpetual hold.  No one wants to fail or make mistakes, but you will never get anywhere if you don’t take the first step.

Know where to draw the line.  Take it from me, there’s no such thing as a bad pizza.